Lessons Learned About the Grieving Process

Lessons Learned About the Grieving Process- By Sandy Gambone 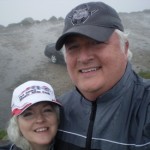 1.  Be compassionate with yourself.

All feelings are OK and valid. You feel what you feel. You may feel anger, guilt, regret and many others, even relief about something. It’s all OK. It does not mean you did not love them, it means you are human.

I don’t always do this, but the times that I have, I’ve realized the truth in the advice of really feeling your feelings. This helps them to move (feelings are energy) and it helps you realize that you are not your feelings.

One night I was in a place of deep despair over Ken’s death – I actually felt physical pain in my heart – and I sat and felt the pain. I did not judge it or try to describe it or explain it to myself, just felt it inside my body, and after not too long it dissipated. I felt lighter and freer. Sometimes I think we are afraid to feel the grief, or fear or anger or whatever. But if we do sit with it and truly feel it, then it can be released.

I was feeling better, and then the 6-month anniversary was approaching. I had what is called anticipatory grief. I dreaded that upcoming day and felt very sad. Yet when the day arrived, it wasn’t as bad as I’d feared. I actually felt some peace and calm.

As of this writing, I am at the 7-month  anniversary of Ken’s death and have felt sad and not so sad and OK. back and forth, as the day goes on.

There are many triggers for sadness. I passed a man in a car who looked like Ken and tears came to my eyes, even though I’d felt fine for days. I don’t listen to love songs, as they make me sad. I went to a wedding this past weekend, and thought about the ‘what might have been’ during the ceremony.

Grief takes time. There is no timetable. Everyone goes at their own pace. Give yourself the time that you need. Spend time alone when you need to. It’s OK to decline invitations you may have otherwise accepted. It’s OK not to feel up to driving somewhere (I’ve run into this a few times).

One of the women in my support group has a friend who is a widow who told her that unless someone has been through it, they cannot understand. I have found that of my friends, a woman who has been a widow for 20 years is the one I feel most at ease talking to. Another friend told me that she does not know what I am going through and is not sure how to best support me. I found that honesty so refreshing and I love her dearly for saying it.

A couple of people have commented on my ‘coming out of it’ or ‘How is your grieving process going?’ I mostly let the comments slide off of me and don’t say much to them. I know it will ebb and flow and there is no ‘getting over it’. It will always be with me, become a part of who I am. I am surviving and in some ways thriving. In other parts of my life, not so much yet. I do not judge myself, I will get there.

5.  Talking with others who do understand and writing about it helps.

I attend a support group for those who have lost a loved one to suicide held by the suicide prevention organization Samaritans. It is called Safe Place. And it is. It is comforting to be with those that have been through the same thing, who understand the extra layer that suicide adds to a death. There are women who have lost husbands of 40 years, parents who have lost only sons, those who have lost siblings, a man who lost his mother, and those like me, who lost a boyfriend.

It is not therapy, exactly, but it is being with others who are going through the ‘If only’, the ‘what if’, the regrets that this kind of death brings up so strongly. And I find that helps me immensely. It doesn’t matter how long it has been since the death, it is a group that you can discuss the issues with, people with whom you don’t feel like you have to act fine around because you wonder if they are tiring of hearing about it.

Writing has helped me, also, as I don’t have a lot of people I am close to that I feel I can talk about my grieving process. I found writing in my journal helped me to sort through my feelings and to get them out.

I need to talk to Ken and have his picture around where I can see him often. Most of the people in my support group said they could not bear to have pictures around, or had them in only one room that they didn’t go in all the time. I even have a picture of Ken and I as my computer wallpaper and I say Hi to him every time my computer boots up. A couple of those in my support group had a voicemail that they liked to listen to and keep saving it so it won’t get deleted. This is all a personal thing and there is no right or wrong choice. Do what feels right in your heart for you. I have some recordings from when Ken had his own radio talk show and I have listened to a few of those and I enjoy hearing his voice. One from several years ago mentioned a former girlfriend, so I won’t be listening to that one again.

I am doing a 5K walk put on by the suicide prevention organization, the Samaritans, in a couple of weeks. I feel that Ken would be proud to have some of us walking in his name for a great cause, even if he never and never would have contacted them for help.

I had a reading with a medium and was told that Ken wanted me to remember him how he is now more than how he was. Now he is radiating light like a sun. So I looked for and bought a necklace of a sun, with the center a dome of amber, and I bought a wind chime with a sun on the top. I wear the necklace often and tell some people what it represents to me.

As I said, I talk to Ken often. Sometimes I sense he answers me, mostly I just want to say Hi and to tell him I love him and to send him love. During the reading with the medium Ken talked about him not seeing his own light when he was alive, but that I did. He wanted me to share that when people die from suicide their loved ones often focus on the pain their loved one must have felt in order to take their own life. He said this doesn’t help their soul and that we need to send them love. I had been doing that since he died (I had read years ago something about it) and he said it really helped him. So, I want to let others know that no matter how your loved one died, send them love, as it helps their soul on the other side.

**Thanks  Sandy  for submitting such helpful tips. Please share your comments about these tips  in the box below.

Would you give the same tips as Sandy or can you share your experience in the comments section below.

If you want to submit a story for the Heartache To Healing site, you can learn more by clicking here.

One Response to Lessons Learned About the Grieving Process