I asked Kevin McNamara to share a little of his story of the death of his daughter because we so often don’t hear from men and the feelings associated with grief.  Please take a few minutes to read the story and check out the good work he is now doing on his website listed below.

Holly Maree McNamara, was born on the 20th August, 1988 at the Dandenong Valley Private Hospital in Melbourne, Australia. Holly died on the 18th of January, 1989. She died from Sudden Infant Death Syndrome (S.I.D.S).… END_OF_DOCUMENT_TOKEN_TO_BE_REPLACED

Posted in HOW DO YOU DEAL WITH GRIEF | Tagged birth, death, Inspiration | 1 Comment

How has a death put your life in perspective?

I put a message out on Twitter the other day and asked “How has death put your life in perspective?”
Because I believe death does change how you look at life and depending on the relationship you had with
a loved one who has died your perspective may be different than others.  I really thought these comments
were worth sharing with everyone, so thank you to all who commented.
Please feel free to add your comments to this post if you feel so inspired.

Melissa Miller
Life on earth is short and not forever, but eternity is………………sometimes it take… END_OF_DOCUMENT_TOKEN_TO_BE_REPLACED
Posted in HOPE and INSPIRATION | Tagged death, perspective | 5 Comments

Following the death of your loved one you will face the significant days that will make you remember  your loved one who is now gone.  On those days your emotions may be more fragile as you reflect on a life that is gone by. END_OF_DOCUMENT_TOKEN_TO_BE_REPLACED

Posted in HOW DO YOU DEAL WITH GRIEF | Tagged cope, death | Leave a comment

What Can Faith Do to Heal Your Grief?

I talk with people about their losses all the time and it seems evident to me that more often than not it is ones faith that see’s them through their darkest, most difficult times.  END_OF_DOCUMENT_TOKEN_TO_BE_REPLACED

Memorial Day – A Day to Remember

Memorial Day is that day we set aside to honor those who have served in our military and died.  Regardless of our political opinions on war and the military, today let us all honor those who had the courage to serve this country with honor.  I thank you. 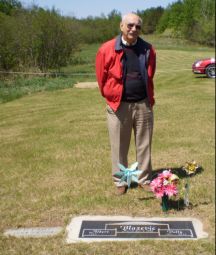 On this memorial weekend many people honor and pay respects to loved ones who have died.  I accompanied my Dad to visit the graves of my Mom, my grand parents, aunts and uncles.  We reminisced   about fond memories, shared a laugh or… END_OF_DOCUMENT_TOKEN_TO_BE_REPLACED