Last week I had the honor of speaking with  Taryn Davis, founder of  the American Widow Project and her partner Nicole Hart.  These two women amidst the grief of losing their husbands  in the Iraq war, have become dedicated to support the new generation of widows – that of the military widow.  They want other military widows to know they are not alone so Taryn produced a documentary DVD about the journey of six military widows, their struggles and sorrow and is FREE of charge to all military widows simply by sending a request to their website.  Anyone else can purchase the DVD for a small donation. Their goal is to have the military distribute a DVD in each packet given to the widow after the soldiers death, this way the widow will immediately know she is not alone.

These women have a beautiful RV with the names of all the fallen soldiers from Iraq and Afghanistan.  Nicole told me this to “honor the fallen, the heros, not to make a head count of war, this represents the life behind each name as well as the survivor behind each name” They plan on making a trip from the west coast to Washington DC where they plan to be on Memorial Day 2009.  They will be stopping at military bases along the way to talk with other widows and share the DVD.  They need our help to make this journey, so I encourage you to DONATE today and help these brave women reach out to those who are grieving a loss.

At the age of 23, these young women are wise beyond their years. Taryn said to me “we all understand that grief is universal even if you are not a military widow”and they wanted to share a few tips on healing they have learned;

1.  FOLLOW YOUR HEART – said Taryn, do what you think is right and not what others think might be best for you or how other think you should feel.

2. HOLD TRUE TO WHO YOU ARE – said Taryn, don’t think what I tell you about grief is what you should do. We’re all different.

3.  HOLD ON – said Nicole, when people tell you to let go or move on, it’s OK to hold on to memories. Those memories helped her through this journey called grief.

4. ONE DAY AT A TIME – said Nicole, to concentrate on today only helped. Don’t try to think about next week, rather take each day as it comes.

Their mission is not to tell people how to grieve but to talk and share stories but most of all to comfort and let these widows know they are not alone, that’s true Heartache To Healing. Taryn told me someone once said, “Its not so much about the road you take it’s how you take it.”  I think that’s awfully profound.

I humbly thank Michael Davis and David Hart who gave their lives for liberty, for freedom and for the United States of America. 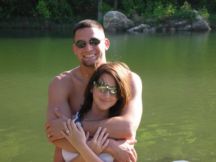 3 Responses to The American Widow Project