How One Mother Honored the Death of Her Son

The day our son Paul died, the director of development at Crossroads School, where Paul and his brother Ben had attended high school, called. She was sympathetic, soothing, and selling as is the way with development directors for non-profits. I know. I used to be one. What she suggested was an endowment fund in his memory that would benefit the high school’s jazz music program. How smart she was. As a jazz pianist and composer Paul had greatly benefited from that program, so I was sold on giving back to it immediately. By the time of his funeral we had it set up.

In that first year we made several other donations.  The charity nearest and dearest to our hearts is the Didi Hirsch Mental Health Services. Besides money donations each year we walk in its suicide prevention run/walk and attend its Erasing the Stigma luncheon. I truly believe this stigma and shame kept Paul from seeking help and talking about his illness. The work Didi Hirsch does to erase that stigma and to prevent suicide would have been so useful to us while Paul was alive, if only we had known that a place like Didi Hirsch existed.

We donated a plaque in his memory at the Jazz Bakery to memorialize the last time Paul played piano in public. He played in the Crossroads School Jazz Ensemble reunion concert the December before he died. He only played one tune, and it was hard for him to even focus on that.

On the first anniversary of Paul’s death we planted a tree on our property. It stands at the edge of our driveway like a welcoming sentry in the place where an old Monterey pine once grew and died. We knew we wanted a flowering and climbing tree. We had hoped that whether we’re still at this house or not, some little boy or girl would find joy in climbing that tree and sitting in the leaves as Paul did in the old pine as a boy.

Also on the first anniversary we had a ceremony to dedicate his gravestone. Officially this ceremony marks the end of the Jewish year of mourning. And even though I made much progress in that first year toward surviving his loss, official or not, I was not through mourning for Paul. I couldn’t stop thinking he shouldn’t be here, that he doesn’t belong here in a plot surrounded by old, old dead people, that he has too many things to do and places to go yet, and that he can’t do any of them because he is here.

Bob was at my side and held my hand during the dedication ceremony as we gathered in a circle on the grass next to Paul’s grave. The Rabbi spoke, said some prayers in both Hebrew and English, and recited a beautiful poem. Then we all recited the Lord’s Prayer and the Mourner’s Kaddish  – a prayer that affirms life rather than rants about death. The Rabbi then took off the red cloth that covered Paul’s black granite stone and the dedication was over. Just like that. One year of mourning officially over with the swift removal of a red cloth – like the curtain rising at the start of a play. Well, I wasn’t ready for the play to start. I had more mourning, grieving, wallowing to do. The first year was over. I had made a lot of progress in that first year, but I still had a long way to go.

Since Paul’s death it has been our tradition to visit this site on his birthday and death day every year. We don’t stay long. All I need is a few minutes to reconnect, to stop what I’m doing in my busy life to just be with Paul. But, really he is with me everywhere – all around our home, in my office, in the car, wherever we are when we travel, in my words, in my mind, in my heart. I don’t need to look for him in the cemetery. Being there affirms his death. The other places keep him alive for me. 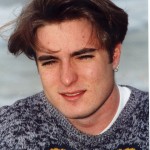 During that first year, I made a memory list of things unique to Paul. At first it was in prose form and then I turned it into a poem that I like to post on my blog on his birthday. I also have it in my memoir Leaving the Hall Light On: A Mother’s Memoir of Living with Her Son’s Bipolar Disorder and Surviving His Suicide (Lucky Press LLC, May, 2011). I felt like I was racing with time because I didn’t want the passage of time to fade his memory from my mind. However, even though he died twelve years ago, I haven’t forgotten my memories of Paul. Here are a few items on the list.

Madeline still honors her sons memory through suicide prevention work and donations to mental health and suicide prevention organizations, such as Didi Hirsch Mental Health Services, NAMI: National Alliance on Mental Illness, and the Facebook page Putting a Face On Suicide. She also continues to write to keep his memory alive and aid in her healing. Last December, Paul’s birthday month, she profiled a mental health or suicide prevention organization every day on her blog Choices. She also blogs for Red Room, PsychAlive, and Naturally Savvy, and she is currently working on a novel.

IF YOU’VE EXPERIENCED SUICIDE IN YOUR FAMILY OR WOULD LIKE TO SHARE COMMENTS ON HOW YOU HONOR THE MEMORY OF A LOVED ONE, PLEASE SAHRE YOUR COMMENTS BELOW: