Moving Forward In Grief Through Music

Anyone who has experienced the death of a loved one knows how it feels when we are stopped in our tracks, almost paralyzed from moving forward as we battle through our grief.  It is often described by people as life standing still.  This was no different for Arlen Roth and his surviving daughter Lexie following the tragic auto accident that took the life of his wife and daughter.  Here’s how his loss and music transformed him to live life again. – JoAnne 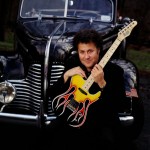 “The devastation that a tragedy such as I went through can cause is beyond the imagination of anyone, except those who have unfortunately also gone through such a loss, but one can never truly “heal” from having your 14-year-old daughter and wife of 17 years ripped away from you in a blink of an eye. The only thing I could do (and what I HAD to do) was go on for my surviving daughter, Lexie Roth.

It was many months before I picked up a guitar again after the accident in 1998, and even then it had to almost be forced upon me. My daughter Lexie eventually started writing a lot of songs and several dealing with the tragedy, which led to her first album, “One Long Blink,”and which is also reflected in some of the songs in her current release, “Lexie Roth.” It took me 3 years before I could go into the studio again, and all I could do was make a deeply personal, all-solo acoustic alum called “Drive it Home.” This album featured many songs made up right on the spot; a kind of “emotional, musical photography of notes” that occurred simply as I felt them. Being the kind of player who always “shoots from the hip” anyway, this was just a further and deeper statement of who I was, who I am, and especially who I was at that very moment of raw, musical emotion.

There have been even four more albums since then, but my latest, “All Tricked Out!,” is a kind of ripping off of the shirt and stating that “I’m really BACK!”. Sure there is still tons of emotions to hear and experience, but there is no hesitation to be a bit playful, to show some humor, to show that I’ve musically “moved forward” in not only my playing, but also my life.

For the last 14 years since the accident, it felt as if literally NO time had passed. Now, it  least feels like time, albeit too quickly now, has started to move forward again, through the time and notes in my music, as well as watching the time and life move forward through my surviving daughter, Lexie. I hope folks enjoy this record, and through the notes I play and sing, hear and feel the indescribable emotions I can’t help but convey!

Known as “The Master of the Telecaster” and “King of All Guitar Teachers,” music lovers consider Arlen Roth “the guitarist’s guitarist,” a brilliant musician, but that’s only one aspect of his remarkable 35-year career. He is a highly regarded authority concerning “all things guitar,” from writing about guitar playing, to being the inspiration behind their creation, due to his fluent mastery, and rare ability to seamlessly cross over musical genres and playing styles.

Posted in HOPE and INSPIRATION | Tagged death of a loved one, grief
Subscribe
Login