“It’s a year since he’s passed and I was really waiting and anticipating on how I would deal with it. I wanted the day to be over with and get it behind me but I also wanted to honor him and made a promise to honor him every year. I went back to North Carolina and the place we were the happiest, the place we were going to retire to.

I found a small country church and asked if they would unlock the door for me to go inside with my dearest friends. I read a prayer that we gave out at his wake and the short note my daughter read at his grave sight. I cried and so did they and then I was left alone for a few minutes to sit there.

I came back home and made a very hard decision to take my wedding band off and put it the box with his. I’ll always be married to him in my heart. How will I deal with the second year when I honor him? So many questions to be answered and where will I find them?
I know the only way I can deal with this is one day at a time.”
Pam K.
Minneapolis

I am facing the second year anniversary of my husband’s death and some things are remarkably the same as the first anniversary. I started anticipating it about a month ago. I just want the day to be over with so I can say I got through it and now I can go on and face the third year.

I honored him last year by going back to North Carolina where we wanted to retire to and spent the day with two of my closest friends. We went to a small country church and I said some prayers and cried and swore “Why did you leave me alone?”. I thought there would be a great revelation but there wasn’t and I walked away and realized it was just another day of living. My friends and I went out to out to lunch and the day was over.

So many things have happened since he died, some really great things, some extraordinary things and I didn’t crawl into the box and pull the lid shut and wither. If we allow ourselves to see the world and be open to receive gifts, they will come.That’s not to say if I could have my life back with him, I would do it. I have him tucked away in a very quiet and secure place in my heart and he will always be there. It’s called eternal love.

Life goes on, trite as it may sound but I have moved on my journey of grief. It’s a life long progression and I have found joy through my tears. Keep your eternal love but live your moments with hope. Open the lid of the box and let the light in. I have written a poem that I would like to share. It’s a series of four Japanese Haiku’s.

Keeping love alive
in your heart, soul, mind, body
soaring to the moon.

It takes two to fly
like paired monarch butterflies,
fluttering as one.

They reach their special
place and close their wings tightly
around each other.

They become as one
magnificent butterfly
asleep in the dark. 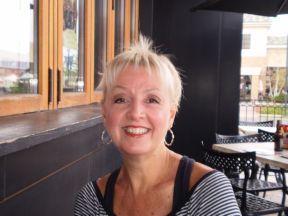