Everyone’s grief journey is unique to them. Heartache To Healing subscriber Melinda Bailey shares her story of triumph to tragedy.

“One cold November morning my husband of almost thirty- eight years, Sid, died suddenly in his sleep. I felt like my shattered heart could not possibly go on beating without him.

I remember lying alone in the dark that night, begging God to take me, too. But when the sun came up, I was still breathing. And I knew that somehow I would have to eventually figure out how to crawl up out of the deep hole of grief that totally engulfed me.

At first all I could do was stumble through the numbness of shock and disbelief. Actually that stage was easier than the many stages that followed. Shock protects you for a while from the deep pain of grief.

As I slowly emerged from that fog, I began to encounter many feelings like guilt, anger, confusion, depression and hopelessness. I also experienced some of the physical problems that often accompany emotional pain.

Even though Sid had not died from an illness, I was told the local hospice offered helpful support to anyone who had suffered a loss. That is where my journey to recovery began.

Looking back, I realize that joining a grief support group and receiving some individual counseling were the two most important steps I took as I inched forward. I was given comfort and understanding, plus the skills I needed to deal with my grief. And that was the key. I was handed the tools, but I had to learn to use them myself. I discovered that over coming grief was very hard work.

I learned so many things during that process. For example, one has to find the “new normal.” Your old life is gone—though not forgotten—and you have to learn to live a completely different way in order to become a productive person again.

Finding the balance between moving ahead, while holding those precious memories of the past in your heart was vital. As my wonderful grief counselor put it, “Sid would not want you to let this horrible experience defeat you. He would want you to try and make the most of your life without him.”

Each person has a different path on the road to recovery. What is right for one person may not be right for another. I also discovered that the stages of grief are different for everyone, and are not always in any particular order. Some people never go through certain stages, while others revisit stages.

It took what seemed like an eternity to finally see that light at the end of the tunnel. I began to experience periods where I actually felt hopeful again. And when I slipped on my road to recovery, I had my grief group to keep me from falling. That in itself was healing. As we helped each other during the recovery phase, we all began to feel stronger.

The first year was very difficult. But I took comfort in the fact that things would get better—and they did. Life has to go on. The best way you can pay tribute to your loved one is to find a way to be happy again.

I also had to learn to stand on my own. At first I was terrified of certain tasks. But once I learned to handle the finances by myself, and other responsibilities that Sid generally took care of, I felt empowered. Growth is another thing that you must experience before you can move forward.

When you lose someone you love, there will always be times when great sadness surrounds you. Anniversaries, birthdays and holidays are particularly tough. But time, hard work and support can help you find your way back from the brink of despair. My tears flow less often now, and sometimes they even roll across a smile as I recall all the good times we enjoyed together.

Six years after Sid’s death, I feel like I am treasuring the past, living for today and looking forward to tomorrow. I not only survived a devastating loss– I emerged as a better, stronger woman. You can triumph over tragedy. This I know.” 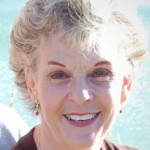 Posted in HOW DO YOU DEAL WITH GRIEF | Tagged grief