When Anger Shows Up in Grief-How to Get Through It 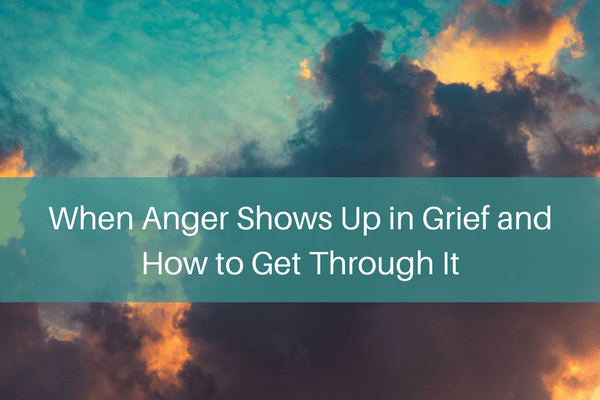 Often we are angry following a death, it’s possible we don’t know how to handle these feelings or how to get through it

After my mother’s death, the last emotion I thought I would feel is anger. Well, really… rage. It welled up from deep inside of me like I was possessed.

I wasn’t angry because of her passing. She had lived to be 96 with her wits about her until the end. Even with congestive heart failure and complications with diabetes, she didn’t suffer. What more of a blessing could you ask for?

Anger Shows Up in Grief by Exposing Past Wounds

Since I was a teenager I have kept journals. Writing has helped me to heal. When I was writing about this anger, I realized where it came from. I was angry for what I would never receive from her, her approval and to hear the words, “I’m proud of you.”

As much as I talk about letting go of the past in the meditations I offer, sometimes, we suppress deep wounds so much that we are unaware of them. These wounds are what surfaced with rage.

Her death made me realize that not only had my father abandoned me, but she had too. After my father’s alcoholic rages, we never talked about it. I was never able to express my feelings and confusion. We all lived hunkered down in our silos… surviving. My mother dealt with any trouble or grief by stuffing it down in her British, stiff-upper-lip way.

Music was her life – her purpose. She received love and approval from the stage. When I was an adult, it was always about her.

You Get Through Your Anger by Getting Help

The hospice people were wonderful in caring for my mother during her last days. They had also been a God send to me. I received several calls and letters after her death telling me that they were there if I needed them. Each time I would thank them and tell them, “I’m good.”

When this rage took me by surprise, I called the counselor, Jill, to meet and talk about it.

After sharing my feelings, she asked me how I was dealing with the anger. I told her that I had journaled about it, but nothing else. She suggested that I physically get the anger out. One of the things she liked to do was to buy cheap plates from Goodwill and smash them. I chuckled at that idea. She said that it was really important to get the anger out.

I am not an angry person. My father’s angry outbursts would cause me to shut down. To this day, I can’t stand to hear someone yelling.

The next day I met with my spiritual director. He also suggested that I break something and recommended I use glasses. He told me to write on the glasses what I didn’t receive and then break them.

I didn’t like the plate idea, because I didn’t want to clean up a mess. Then I got the idea that we have a recycling center in our community. There is a huge dumpster. That’s where I could throw my glasses!

You Get through Your Anger by Physically Releasing It

I found six glasses and wrote things that I would never receive from my mother like: “I’ll never hear I’m proud of you. You only thought of me as busy. You never acknowledged my achievements.”

I took the glasses to the recycling center. The bin for glass resembled a pitching cage. There was a huge backdrop made of metal that funneled into the dumpster. Perfect!

When the coast was clear of visitors, I took out the first glass, read what was on it, and in my best side-arm hurled it at the backdrop. The glass shattered into a million pieces.

I realized that I had never intentionally broken anything before. Knowing that people would be coming and going, I quickly read a glass and threw it. There wasn’t a feeling of euphoria, however, there was a sense of closure. The glass was irreparable. Like Humpty Dumpty, it could not be put back together again.

Immediately after I threw the last glass, I felt compelled to head to church where I sat in the sanctuary. I didn’t pray. I just sat in stillness and silence.

Later that night, we had choir practice. It was then that I felt a sense of lightness. The anger and rage hasn’t returned.

Accept that Anger is Part of Life – Anger Leads to Understanding

Thanks to Jill, I accept that anger is part of life. In my Christian faith, I am reminded of how even Jesus became angry when God’s house was turned into a retail outlet. He turned over tables and drove the moneychangers out with a whip!

The anger I felt transformed into understanding. As a mother, I know first-hand that we are not given a parenting manual! Thinking about my mother’s early life, she did not have a mother who nurtured her. Her mother was very cruel. Based on that fact, my mother had done remarkably well as far as loving us as young children.

I planned a wonderful service for her. On display were her costumes all hanging on a huge coat rack. It was a sunny day and the light was dancing off of the sequins and various patterns. I had a DVD of her show that she performed at her care facility playing alongside the costumes. There was a table that had pictures that documented her entire life. Her favorite English tea was served along with English biscuits. Our choir director, Bill, serenaded attendees from the piano, playing the songs that she sang in her one-woman show.

My brother and I each spoke. I shared what a tremendous life that she had lived. I also shared her triumphs and sorrows.

That Sunday at church was Christ the King Sunday. The scripture was when Jesus was on the cross. His words were, “Father forgive them, for they know not what they do.”

My mother was not aware that she had caused this pain. I’m not sure we could have had a mature conversation about it without her taking it personally and my hurting her. I know that she did the best that she could. I also know that I would not want anyone else as a mother. She was truly amazing. She lived life on her terms and to the fullest. She was a bright light. I was so very proud of her. (Which I had told her many times.)

About fifty people came to the service. There were only two relatives that showed up. While the service was all about her, it didn’t occur to me until weeks later that most of the people were there to make it all about supporting me. That was a true blessing.

We all tend to stuff our feelings down. No one likes confrontations. Denial can be our closest friend. The people that hurt us may not even know that they are hurting us. That is why we who see must shine the light of awareness where there is darkness.

The first lesson I learned here is not to have unresolved business with anyone. I would also add that people need to know how much they mean to you. Only God can read minds.

After the funeral I told my son that I have certainly made my mistakes in parenting, especially during the years of the divorce process. I told him that I didn’t want any feelings to be unresolved between the two of us. I want to be fully aware of my actions and the consequences from those actions.

So, don’t wait until it’s too late to make things right with anyone. Know that it’s okay to be angry and to express your anger. The second lesson I learned is that anger is part of life.

When anger shows up in grief, get through it by getting help and physically releasing it. Know that you can heal deep wounds that will finally come to light. Seek, above all, to understand.

If you’ve never received the approval you longed for, I hope this Word – Approval, taken from my book God Notes – Daily Doses of Divine Encouragement will help you feel it in your heart from the Source that truly matters.

When you break your connection to Me, you lose sight of Whose you are.

Your confidence will wane. You will seek…

Approval from those you with,

Only My approval matters.

When you seek to live your life from truth, justice, kindness, and humility, you will automatically win the approval of others operating from these same values.

You have My approval, My blessing.

You are My beloved. In you I am well pleased.

– Jackie Trottmann is an international author and speaker. Learn more at https://www.jackietrottmann.com/